If you have read my last travel post, you’ll have learned that I recently travelled to Annecy, France. What I didn’t include was the tale of Geneva, where I spent a full day and evening in. To get to France, we originally flew into Geneva airport, and due to awkward flying times, we’d no choice but to stay in Geneva for one night. Given this opportunity, we took it upon ourselves to spend a full day in Geneva, Switzerland.

10:00am: We arrived into Geneva after about 50 minutes in a taxi. Our taxi cost us €120, *be sure to book privately and with a French driver to receive a greater price. We were dropped to our hotel, The Starling, which was situated only minutes away from Geneva airport. The beauty about this location was we received free airport transfers and the main desk displayed flight times and delays on a large screen in the main foyer. To be frank, the hotel room was absolutely astonishing. The bed could’ve fit four people and we were gifted Swiss chocolates on arrival. The only issue was being asked for a sneaky security deposit on arrival, which Bookings.com failed to tell us about. Luckily, it didn’t set us back, but do be weary of this if you decide to book with them.

11:30am: After an hours rest, we departed our hotel, taking the bus number 5 to get into the city centre. The locals in this area were extremely helpful, offering advice before we had the chance to ask for it. The journey from our hotel to Geneva’s city centre took approximately 20 minutes on the bus. On arrival, we wandered the streets, baring our surroundings. We were eager to visit Jet D’Eau, one of the worlds largest fountains. We also wished to visit the UN. With both of these on our to do list, we started to do some online research only to find that the UN closes at 12pm. It’s actually situated closer to Geneva Airport than it is the city center which definitely came as a surprise to us. We were a little disappointed but continued on, hopeful to see the infamous fountain.

1:00pm: We arrived at Lac Léman (Lake Geneva) which is surrounded by the Alps and Jura Mountains. The city overlooks Mont Blanc. On arrival to the lake, the fountain was nowhere to be seen. We searched everywhere only to find that the fountain had been turned off. I honestly felt my heart drop, it was the only site I was eager to truly visit. After a little disappointment, we grabbed some water and snacks (which cost us our left leg), and sat by the lake. Food is extremely pricey in Geneva, so bare this in mind. I bought an ice-cream, popcorn and a bottle of water for 15 CHF (Swiss Franc), which is the equivalent of 12 euro. After our little food break, we toured the lake, photographing the beautiful scenes surrounding us. 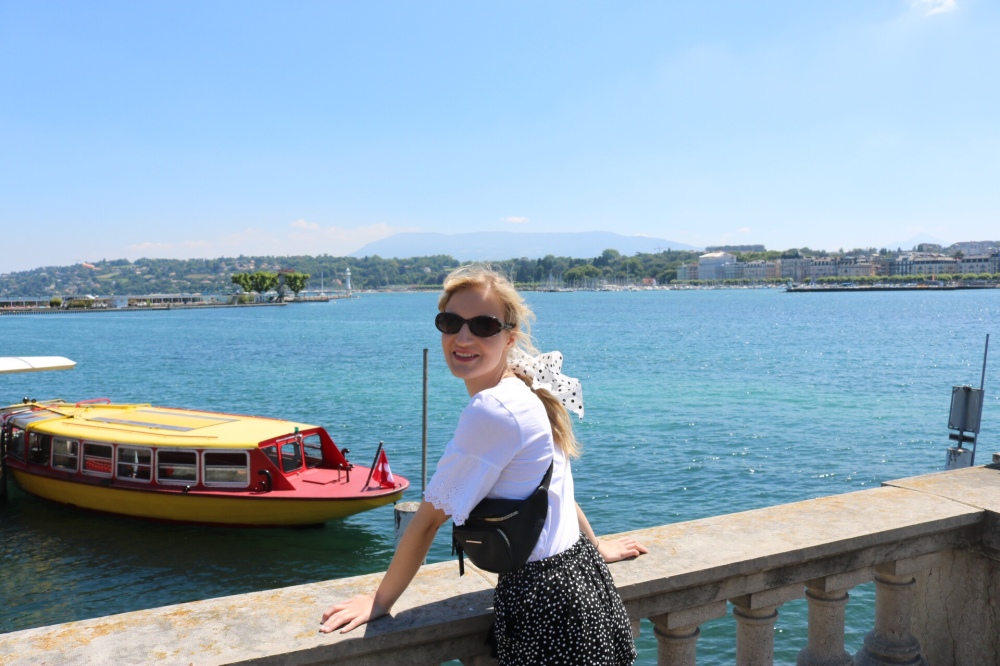 2:30pm: We decided to venture into the city centre. On our way, we passed two massive sites, L’horloge fleurie and The Brunswick Monument. L’horloge fleurie, or the clock made of flowers, is an iconic outdoor clock which was designed in 1955. Clocks are extremely popular around Geneva, as Switzerland is the home of Swatch. You’ll find clock shops on every street, along with chocolatiers of course! We later passed the Brunswick Monument which is a mausoleum commemorating Charles II. We took a few photos and continued on. I can’t say that these monuments stood out a mile, but I’m grateful that I got to see them.

4:30pm: After a long morning, we decided to scope the city centre. The city is filled with the most prestigious stores, from Gucci to Louis Vuitton to Versace. After some scavenging, I finally found a shop that met my interest, Bershka. I love the fashion this shop provides, and I knew I’d leave the store with a bag in hand. I was right. After a visit to a few high street stores, we ventured to a chocolatier. To be frank, the chocolatiers are overpriced, but this is expected in a financial district. That being said, they are way cheaper than the chocolate I purchased in Geneva Airport in Duty Free. If you’re looking to buy Swiss chocolates for family or friends, my advice is to buy it in the city before you leave. Duty free was a grave disappointment. We purchased a 100g slab of chocolate for 8.50 CHF. Disclaimer * We didn’t save it for our family or friends, greed got the better of us! * After we looked through the shops, we got caught in the middle of a parade. The locals of Geneva were celebrating the Genevan Lake Parade. Children from the local schools performed dance routines and played musical instruments, decorated and costumed in masks of all kinds. It was quite the sight to see! 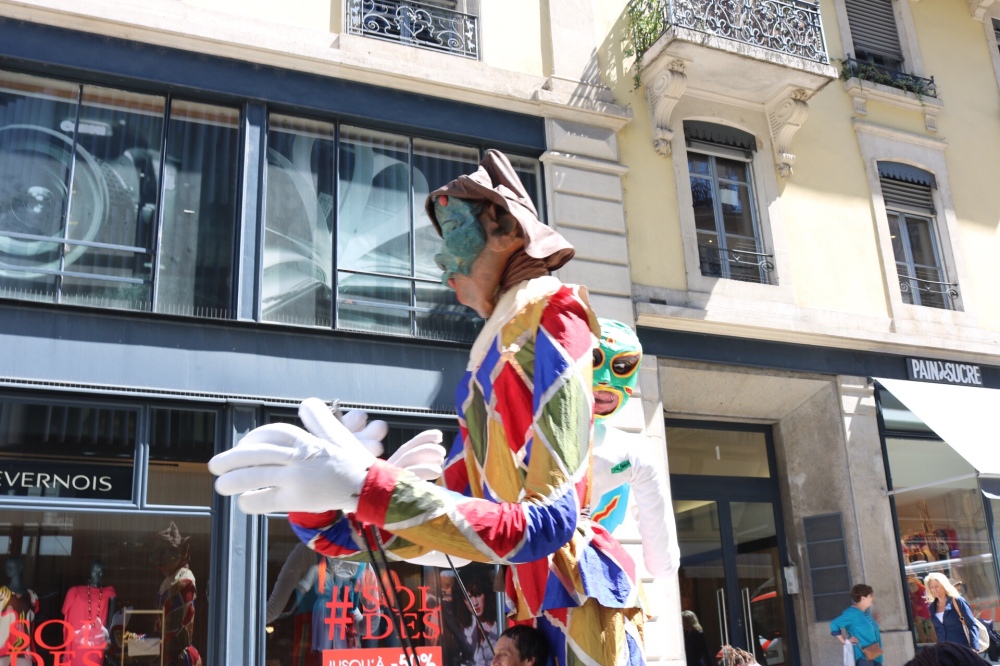 7:00pm: After a long evening shopping in the sunshine, we opted for one last Supper before returning to our hotel. We searched the streets for a recommended restaurant online called “The Holy Cow”. It did not match its online description at all, so we walked up a few meters to a Brasserie, which served burgers and steak dishes at reasonable prices. I got a burger, water and chips for 26 CHF (which is known to be considerably cheap). I was fearful of my burger being tartare, as this raw meat dish is extremely popular in both the South of France and Switzerland. The burger was phenomenal, but as I bit into the middle, I discovered it was slightly pink. To most, this isn’t an issue, but with a dire fear of food poisoning, I refused to eat any more. But having said that, it wasn’t bad, in fact it was fresh and extremely tasty. The staff were very helpful and had flawless English. The restaurant is parallel to Geneva’s train station, which is also close by to Burger King, for those who wish to opt for something trusting and a little cheaper! After our meal, we returned back to our hotel on Bus number 5, which is labeled as “Airport”.

9:00pm: We returned to our hotel room and organized flight pickups and packed our bags. The hotel room offered complimentary tea bags, so we were able to kick back with our chocolate slab and tea, while watching television (which mainly consisted of News channels such as CNN and BBC News). By 10:00pm we were finished packing and ready to sleep. Our 12 hours in Geneva were well accomplished.

Although I only spent 12 hours in Geneva, I can’t say I’ll be returning. As a massive financial district, almost every shop is extremely expensive, and the locals were misinterpreted as a little rash in the city centre. Maybe if I had more time there, I’d discover the greater beauty of Geneva. I’d explore Mont Blanc and tour the Jura mountains in a cable car! That being said, for 12 hours spent, they were spent well and I got a general gist of what that city provides.

If you enjoy chocolate, love the alps, and are looking to shop until your legs are jelly, Geneva is certainly for you. The border is filled with some of the most beautiful hotels such as The Four Seasons and The Ritz Carlton. It’d definitely be worth stepping outside your budget for a short stay in Geneva and spoiling yourself! For those who wish to spend 24 hours in Geneva, I recommend a hop- over to Annecy, France afterwards. You won’t regret it! 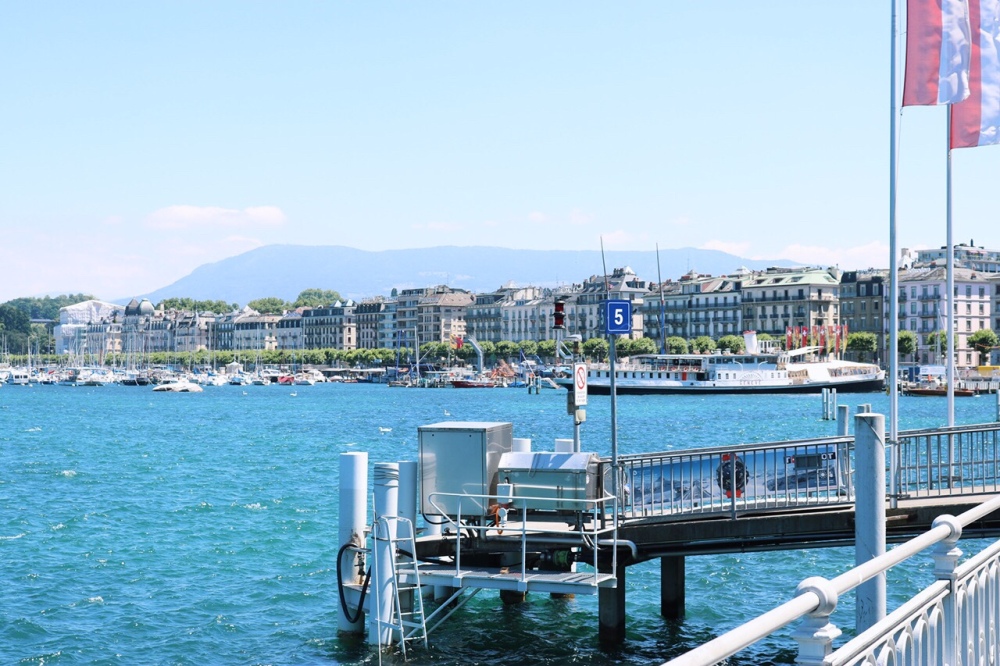