As Halloween is nearing rapidly, some of you may be thinking of hosting a Halloween shindig for you and your friends. Whether or not you’re hosting a night in with your friends or preparing for a huge Fancy dress party, I’ve got a few tips to host the best party for adults.

I have a full blog post on this, but it’s essential when preparing for a Halloween party. Turn your place into a haunted mansion with frightening characters and daunting music. Organise a playlist for Halloween music only, or play blustering stormy sounds in the background to give your home a creepy edge! If you’re hosting a large enough Halloween party, a tip is to make a backdrop for people to take photographs. We live in the Instagram era, so it’s inevitable that people are going to want to take that perfect shot! Decorate an old bed sheet with blood splatters and stains and hang it in an empty space for people to use for photos! 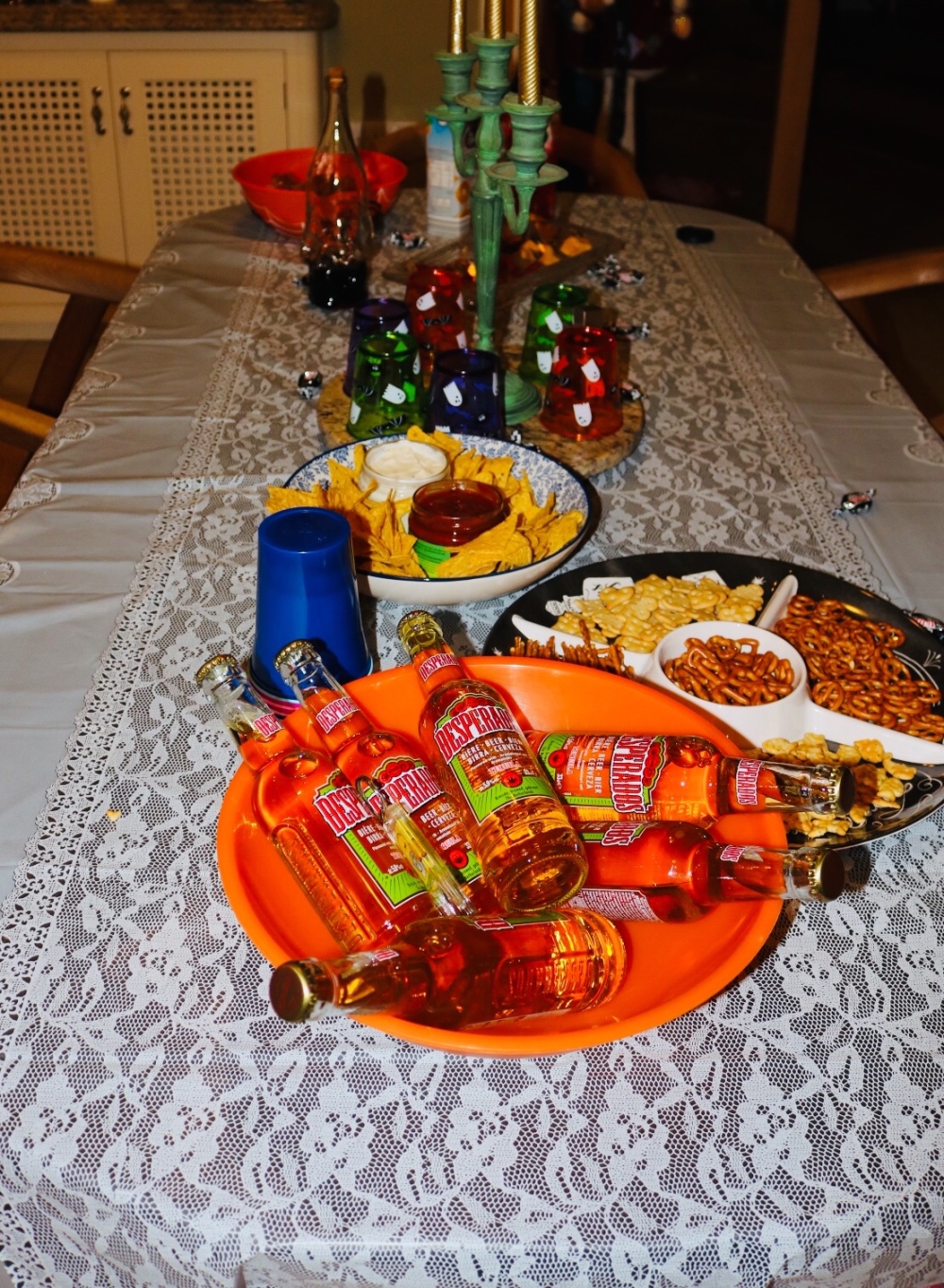 When hosting any kind of party, the biggest asset is food. People will remember the little tartlets you’ve made or the brownies you’ve baked. You want to make an impression! Finger food is always a good taster for a Halloween party. If you’re hosting a smaller gathering with your friends, put on a pizza and sit down with a few bottles and watch Scream. If you’re feeling a little more daring and are hosting a bigger party, pull out some creepy food and cocktails!

Savoury Sticks: Cheese sticks are the best food known to man, so why not utilise these bad boys to make a creepy dish. Throw a few cheese sticks on to a plate with ketchup in the centre piece. Using a cocktail stick and paper, label them as “Ogres fingers” to give everyone a laugh. This idea applies to other appetisers such as cocktail sausages, fries and chicken wings!

Bloody ice: When serving cold beverages, give your friends a fright with bloody ice. Adding just a few droplets of red food colouring, turn your ice into bloody bricks over night and serve them with your friends drinks! Another great idea is making a bloody hand for the centre table as an ice sculpture. Similarly, you will need red food dye. Fill a latex glove with water and red food colouring and leave it to freeze. When you remove the glove after freezing, you’ll be left with an icy bloody hand.

Trick or Treats: Although you’re hosting an adult party, adults have a sweet tooth. You can’t go wrong with gummy bears, chocolate and lollipops mid centre of your table. Everyone loves a good nibble when engaging in conversation so prepare the essentials! If you’re hosting a cosier night in filled with Halloween films, why not get creative in the kitchen and bake some Halloween cookies and buns. Some various ideas include Pumpkin Spice Cupcakes, Pumpkin pie, or good old red velvet brownies or cakes!

Cocktails: Halloween is the time to be creative. If you’re making up a cocktail of the night, go for something wild like a Bloody Mary, or if you wish to stick with something milder, make a blackberry blood orange cocktail! These are made with both blackberry juice, rum, soda and to top it off, blood orange slices. It’s a creepy but fantastic look! 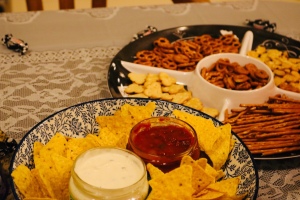 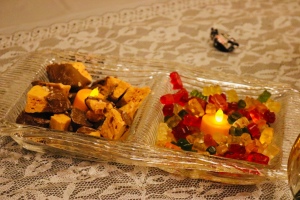 One thing I love about Halloween is the various games you can play. As a child, I loved playing Halloween games, but as I’ve grown older I’ve been given a taster of playing these games as an adult, and it’s utterly hilarious!

Mummified: This game is simple. It’s better played with more than 6 people. You’ll need a LOT of toilet paper. The aim of the game is to team up with one person, and race the opposing teams to mummify your friend. Using toilet paper, you must wrap toilet paper all over your friend from head to toe, leaving little or no space to see their under clothing! If you want to make the game interesting, set a timer and get one person to judge the best mummy!

Swamp dip: This game isn’t for the faint hearted! The aim of the game is to fish for coins using your hands. You’ll need corn flour, water, leaves and possibly a few bugs, green food dye and a massive basin. Pour corn flour into the bottom of the basin, mixing coins or treasures in with the mixture. Pour water into the basin and mix with green dye to give it a swampy look. Then, add your critters and leaves to give it a gruesome look! The aim of the game is to look for the treasures at the bottom of the basin. The person with the most treasures wins. This game may be deemed as easier for adults, which is why I suggest using real life critters to give your friends a spook!

Apple Water Basin: I’m sure you’re all familiar with this game, as it was one of the most played Halloween games!! But truth is, it’ll be so much funnier when you’re at a party with lots of people and have had a few drinks! Using a basin, fill up the basin with apples and water. The aim of the game, for those who don’t know, is to dip your face into the water and try to catch an apple in your mouth. It’s physically impossible!! This game is also fantastic if you’re looking to host a children’s Halloween party! You can also use large money coins, but be careful if you’re hosting for children, as there is a risk of swallowing or choking! If you want to add a twist to this game, add cider to the basin instead of water!

Murder games: If you’re having a quieter night in with your friends, pull out an old board game and play a murder investigation game. Cluedo is always a fun game to play and can be bought in all toy stores.

Trick or Treat Roulette: This game is designed for those hosting a night with alcoholic beverages. The aim of the game is to mix up a variety of concoctions with both alcohol and juice or water. Every person has a turn to take a shot. They must pick at random. The “trick” shots will be filled with water or juice, and the “treat” shots will be filled with a strong liquor!

Costume Competition: Amongst all of your Halloween games, host a “best dressed” competition and give the best dressed a prize or alcoholic beverage! This will encourage those who may not be a fan of Halloween, to get creative and pull out something extravagant!

Pumpkin Carving Competition: A game which can be played with a smaller crowd is a pumpkin carving competition. Players must carve the best pumpkin each, and the best one wins a prize! Watch your friends get crazy creative! 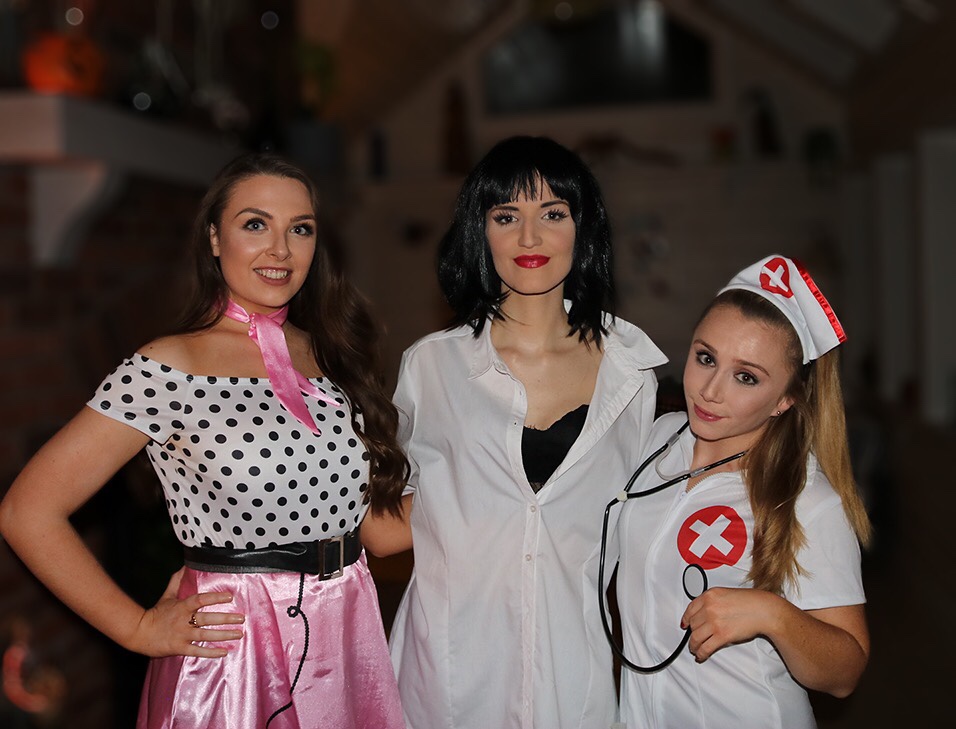 Halloween is the most creative time of the year, so go wild with ideas! If you have game ideas that you wish to share, I’d love to hear them! Use your imagination to decorate your home. Perhaps you’ll create a gothic theme or stick to Autumnal features! One way or another, let your mind run wild with ideas. Have a great one. x 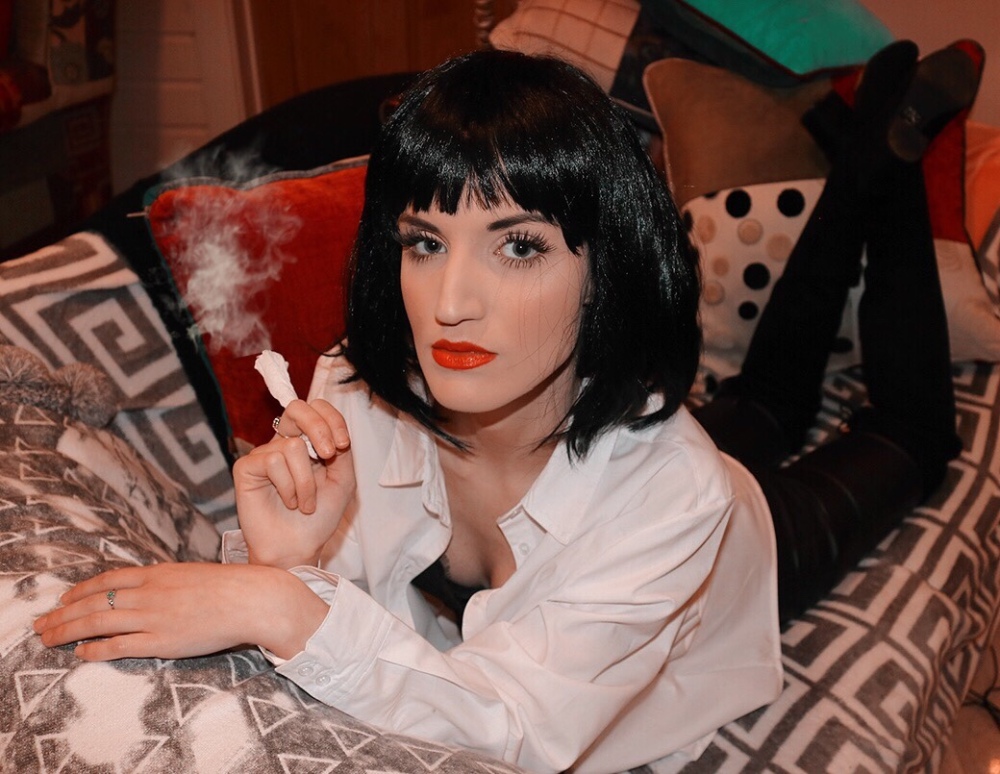