Brisk night. 3am drive to Dublin. Exhausted bags under my eyes. Smaller bags packed under the bus. Arrive at what feels like a century later. It’s nearly 6am. Flight is at 9:15. Why are we here so early. Grab breakfast. Sip on Starbucks. Find our departure gate. Wait for an hour. Board plane. Watch flight attendants make cloying announcements. Finally. Engine is running. And we’re off.

We arrived in Schiphol airport at 11am. A short flight to say the least. Not that I noticed, I was too busy plunging into a deep sleep. We got the metro to the city centre, I fixed my eyes on the golden fields in awe. I gasped at every windmill that spiralled. On arrival, we made ourselves acquaint with the amiable locals. We journeyed Tram 13 to Maastricht, where we would be accommodated for three nights, and four days. The journey to Maastricht took 20 minutes at least. We gained familiarity with the city as we cruised by every street of the Dam. The name of our hotel was ‘The Student Hotel’. A three-star hotel which could have been easily mistaken for a Four star. We were greeted by a very receptive woman at the main desk, who gifted us with Dutch waffles. My eyes lit up, and I tell you, that waffle was long gone after a quick click and snap. Our hotel room was beautiful (considering I’m a low-profile student on a very scanty budget). We unpacked our bags and tidied everything into the big wardrobe on loan. It was time to dish some grub into our hallow stomachs and explore the enticing city. We ate our first dinner in our hotel. I’d a beautiful Risotto. He’d a Dutch Hamburger. After our meal, we enjoyed a fine wine and watched Tram 13 hurtle by every 20 minutes, approximately. We proceeded to play a game of table tennis which was included as one of the hotel amenities. It was time for an early night before the exciting weekend ahead of us.

I fluffed my cheetah print collar and fixed my black suede gloves before leaving the hotel that morning. We woke impressively early, for two people who felt obtusely jet lagged. We left our hotel to find it had snowed the night before. My heart was in my mouth as I whipped off my gloves to throw snowballs at the beau before me. We photographed our iced feet and bustled to tram 13. We ventured to Anne Franks museum for 11am. We hopped off at Prinsengracht and walked amongst the Chinese, queuing for what felt like a half an hour, but what was only moments thanks to our trusty online tickets. Anne Franks’ museum was like nothing we’d visited before. It was filled with sadness and compassion all at once. The trip around her desolate home took us about two hours. I was moved by Anne’s life story, it’s a place I highly recommend.

We journeyed from Anne’s house to the main centre for a quick bite. Our afternoon was spent touring the streets of Amsterdam. We discovered little bakeries filled with colourful waffles. We spoke of dreams to live in a place as crafty as Amsterdam, it reminded us of home. We roamed Praca Dam as the evening approached. Lights filled the square, boasting a Christmas vibe. We acceded to a beautiful little restaurant by the canal for our dinner. After we got our fill, we decided to walk the red-light district. It wasn’t until this moment that I realised in dismay, I’d lost one of my gloves while excitably playing in the snow earlier that day. We ushered to the nearest Primark to get me a new pair, as I feared losing a finger. We found a little bakery and bought tea to cosy our glaciated fingers. As we walked through the back streets of Amsterdam, we made unique discoveries. Chinese embellished buildings sat in dark alleyways. They reminded us of China Town. We followed the red hue that brought us to the Red-light district. It was 6pm, so we met nothing exciting along the way, which was probably for the best. We were crippled with the cold, so called it a night. As we returned to our hotel, we made the decision to play dress up and sat in the faddish local bar, sipping on local Dutch beer. Our night ended gracefully as we took to the white sheets and watched estranged films until our eyes drifted into slumber. 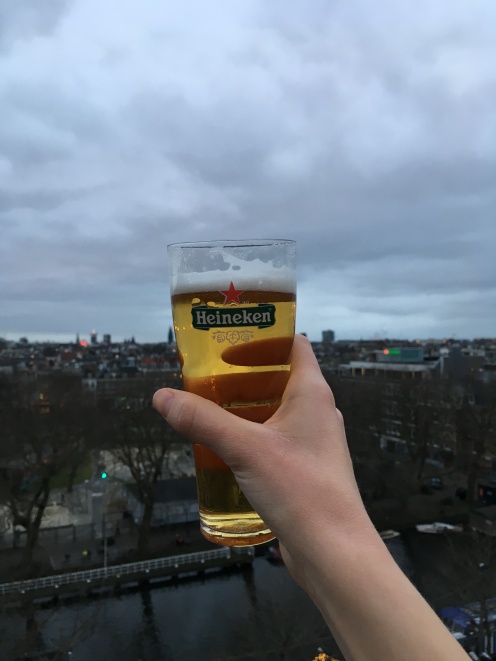 An experience I will never forget!

Sunday morning was brisk and cold. It rained a little. We woke up rather early. We had a long agenda which we wished to complete. We got tram 13 to Praca Dam where we sat, overlooking the square, indulging Strawberry and Nutella filled waffles. I scraped every inch of chocolate off the paper box it lay in. Afterwards, we rushed to the nearest ‘Hop on, Hop Off’ bus. He wished to see the Heineken Breweries. We sat on the top of the bus, gasping for warmth as the cold air hit our bare skin. We arrived at the Heineken experience in the early afternoon. The building stood tall, with the word ‘HEINEKEN’ embellished in luminous green lights. As we entered the warm temperate building, the smell of malted barley hit our nostrils. After displaying our tickets, we entered the brewery. During this experience, we were given the opportunity to endure the factory lifestyle. We mixed barley and visited Heinekens signature horses in nearby stables. The whole enterprise was wonderful. Towards the end, we were escorted to the rooftop, where we were given complimentary glasses of Heineken. We peered over the edge of the open terrace, engulfing the magical views of Amsterdam. A few generous ‘grass’ smokers gave us a lending hand by taking our photograph, which stands still as one of our favourite memories to date. Our time at the Heineken experience ended. We spent our afternoon on the tour bus, and as the evening approached, we went for dinner in a beautiful little spot outside the city centre. We then proceeded to venture to my favourite spot. The Ice Bar! I couldn’t contain my excitement as we queued up. On arrival, we were given the opportunity to buy two drinks, and one large ice beer on arrival into the ice bar. It worked out supremely valuable. We mounted on used petrol puffed coats and one size fits all gloves as we entered the bar. As we arrived, I could feel the cold hit the tip of my nose. We were surrounded by sculpted ice. Ice bears, ice chairs, ice bar, you name it. I warmed myself up with an iced vodka and coke. He indulged an ice beer. We lasted at least ten minutes before calling it quits. The cold leaked through my gloves. My hands ached. It was minus nine degrees. I questioned how I could ever afford to visit somewhere in the Antarctic region. We walked for hours, aimlessly, enjoying our last evening by the canal. We appreciated one last waffle before we left. We stuffed our faces with treats and alcohol, to scorn how we felt to be leaving so soon. We returned late that evening on Tram 13, and said our goodbyes to the nightfall in Amsterdam.

I woke up feeling rather empty inside, but I turned to my side and smiled, feeling grateful for every moment I had spent in this beautiful city. I thought about my future return. I thought about how one day I’d love to live there. I thought about how I’d spend my Summer, educating myself on the Dutch language. I sighed before clambering out of the bed, to discharge my folded clothes from that wardrobe on loan. Our flight wasn’t until after hours, so we packed up and took one last adventure into the city. We ate in a little parlour in the city, close to the train station. I had a salad, so dainty that I treated myself to more food afterwards. We visited the grand shopping malls of Praca Dam to pick up treats for our families. We then proceeded to visit the Tulip museum nearby to collect little ornaments and decorations. We spent our last supper in a little nearby café. We had egg based dishes and designer tea. After hours of fulfilment, we returned to the main square. We waited patiently for Tram 13. I took one last glance around me as Tram 13 neared. I held my breath, choking on contending tears, knowing our days here were over. We hopped on the tram and enjoyed our last few passing minutes in the city. As we stepped off the tram for the last time to catch our train to the airport, I said my goodbyes to Tram 13. I fell in love with a place called Amsterdam, a place that felt so close to home. 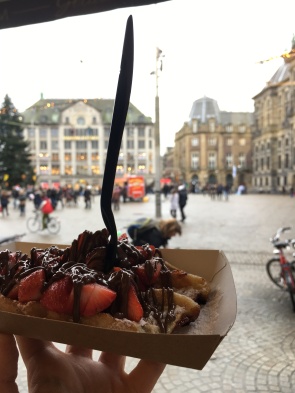 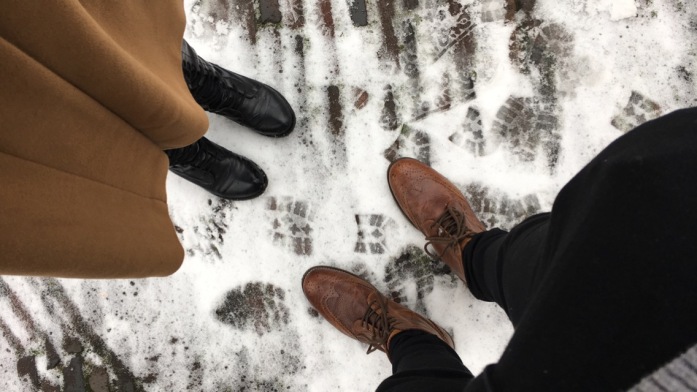 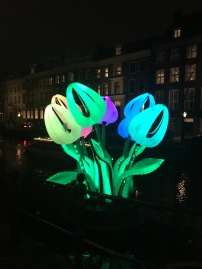 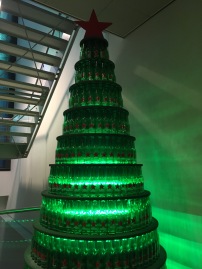 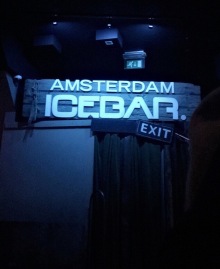 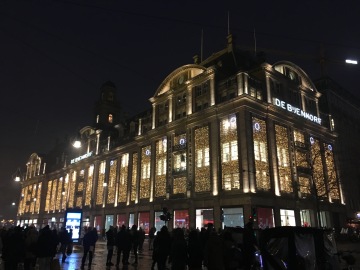